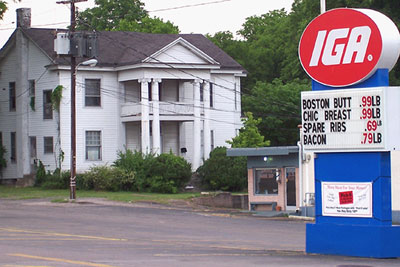 The aching house stands awkward, hulking,
beside the Piggly Wiggly-or is it an IGA now-
and the barbershop, as if reading over the shoulder
of another era. If the house had shoulders,
they would hunch, embarrassed of its peeling paint
and sagging lines, next to the brick and neon.
This week spare ribs 69¢ a pound, a sign proclaims.
As if hard of hearing, the house refuses to be gone,
to give up its parking spot, to collapse into its own arms.
It’s failed to read the circulars. A weakening offensive
waged against asphalt, against a cheap cut and shave,
against spare ribs, against time. But like a good ghost,
it doesn’t make a scene, just holds its tongue, its stories
tightly like an apology. What a lady! What a gentleman!
While the barbershop pole just can’t shut up.
It just spins and spins its red, white, and blue.