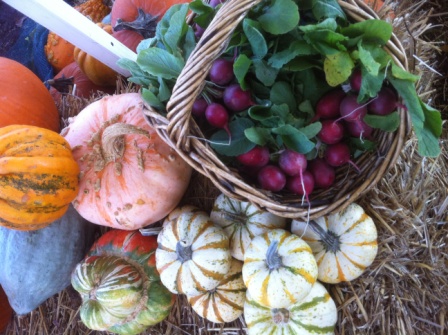 My immediate impressions as I walked across the dirt parking lot toward the two men included some stark physical observations: both were dressed nearly identical, sporting a full chin of whiskers and a razor burned clef below the nose where the mustache belonged, standing taller than the other men and boys waiting in the wagon queue, confident enough to look directly in my eyes as I interrupted them. They were obviously brothers.

During the hour and half drive south to this remote produce auction house I had mulled over a few ice breakers, but what I think I said was … “That’s a pretty horse.” This would be the beginning of what has grown into a long and sometimes awkward collaboration between our little social enterprise we call Good Food for Good People, founded in Nashville in 2003; and the Amish farming settlement, founded in Etheridge Tennessee in 1942. 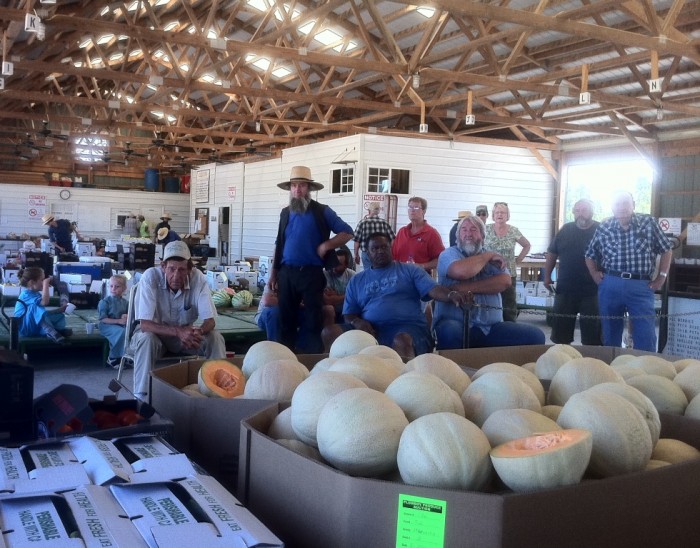 This first meeting with David and Isaac Gingrich occurred on the Friday of the third week of October, 2010. Outside in the low and crisp sunshine we spoke while the wagons, drawn by smallish draft horses, paraded bins of pumpkins and gourds, cases of butternut squash and sweet potatoes, bundles of dried corn stalks and bunches of turnips down a recessed alley that split the middle of the auction house. The buyers at once loitered and then suddenly raised their arms while the auctioneer rhythmically called out offers-to-sell and barrel-chested men in dungarees played product model, waving produce in the air for the shoppers to see. Bidding quit pretty quickly on each item and the winner often secured some choice item or another for little more than a song.

Having managed a few farmers markets in Nashville and seen a good bit of produce sold in my day, I commented that the prices were maybe a touch low. In a manner I at first took to be whimsical, but later decided was the result of an earnest faith, David explained to me that there were days when the prices were low and others when they were high, and that it all averaged out okay over time.

Still, not convinced that averages made for happy farmers, I clumsily pressed these two with a direct interrogation that now makes me blush to recall. “Why” I asked, “are you content to sell this high quality produce for so little? Wouldn’t you rather I come directly to your farm a few times a week and pay you better prices for your food? Wouldn’t that be better than to sell for little more than the cost of the box you packed the food in?”

What David explained to me that day, and Isaac confirmed with nods and grunts of affirmation, really blew my mind. Here is how I remember it:

“For us, farming gives many of us a job. Not all of us can make furniture or trim wagons or run a saw mill. We have big families and our population is growing. We need the farm to raise our children and teach them our way of life. Farming is central to our community, our church and our future. And the fact is, we grow more food than we can possible eat.” 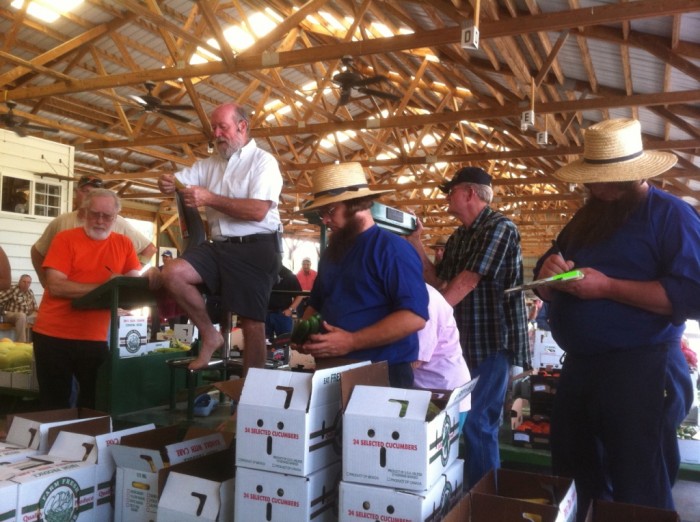 “As for making a side deal directly with you — or any of these other folks here, that is not in the best interest of our community. We have some strong farmers and maybe some not so strong. The buyers are the same way. Some will pay a fair price and others are looking to get our food for as cheaply as they can. But if us growers stick together, the good buyers will have to come here to get our food and even the small farmer has a chance to sell their food to them. If enough of us come here with enough good food, we believe the good buyers will come regularly. But if they just make a side deal with a single farm, that money doesn’t have a chance to get to all the other families.”

I felt like I had been thrown into the deep end after just learning to dog paddle. Not quite drowning, but taking in water by the mouthful. These people “of antiquity” had thought a few things out and they had a certainty so rare in my day-to-day. Their argument was that how they lived, how they cared for one another and how they kept their social contract with one another was more important than what tomatoes brought that day, week or even year. So certain of the ground they stood on, I accepted what they said on face value and just pushed on.

“What would it take for you to get a good price and for us to get your food to the folks who want and need it in Nashville?” They smiled in stereo and then the quieter Isaac patiently explained it to me as if I were a child: ”Anyone can come here in good faith and bid on the food here at the auction. If there is something they want, all they need to do is keep raising their hand until they own it. If we can get a couple more strong buyers we will be alright.” We talked a little longer and ended our first meeting with the same shyness we had started it with …

On my drive home I replayed the essentials backwards and forward. These families were held together by the day-to-day activities of attaining food, clothing and shelter. Their voluntary simplicity, Germanic work ethic and modest attire made them look suspect, but look a little deeper and you discover a 21st century society intentionally attending to their family’s well-being, economic security and perhaps even their own hereafter. And at the center of it all is the farm.

For the next five months, David and Isaac lurked in the shadows of my mind, falling in and out of place as I shuffled my ideals and my realities. At the core, my wife Carole and I had started Good Food for Good People because we believe ALL PEOPLE have the right to a safe and adequate FOOD system, an accessible and sufficient HEALTH system and an open and uncorrupted JUSTICE system.  We have thought about this enough to state unequivocally that these principals are all interconnected.

So could it be as simple as being a person of good faith ready to pay the farmer a fair price (JUSTICE), carrying this exceptionally fresh local FOOD to people who needed and wanted it (HEALTH) and trust that the self-organizing principals of nature would fill in the gaps? The short answer is yes. How it all unfolded this year deserves more storytelling than there is room, but here are the highlights: 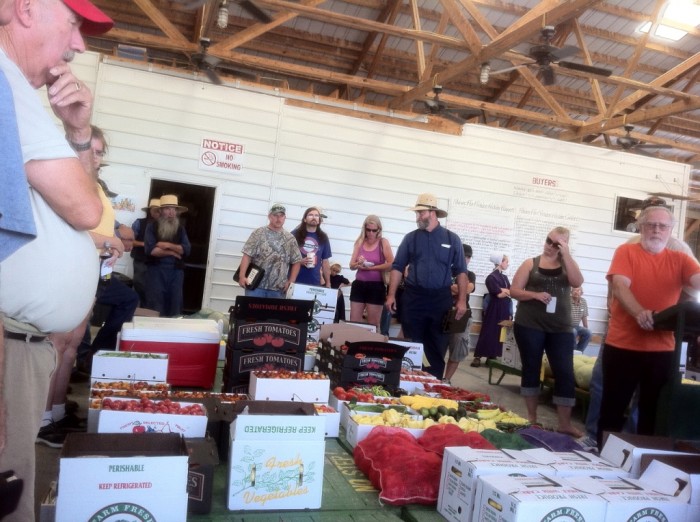 A UPS sized truck was given to us. Friends lightened my workload and sent me to Etheridge twice a week to raise my hand on behalf of thousands of Nashvillians. I spent their food dollars with these local growers until we became the largest buyer at the auction and had raised the average prices the farmers received by over 40 percent.

The affordable food brought back to the community supplemented the mobile offerings at low-income senior towers, high-end farmers markets and provided the food for several new farm-stand programs, including two at our regional Veteran Hospitals. Somehow the pacifist plowboys produce had found its way in the wellness programs of the western warriors. This particular project was elevated within the national veteran affairs agency as an outstanding innovation of 2011 and the government is looking for ways to replicate it across the country.

It would be easy to go on. But people hardly read anymore and really it is a never-ending story. The new income is being invested in Etheridge on modern produce houses, updated equipment and additional acreage. Farms are growing to keep up with the families.

David’s wife is pregnant with their eleventh child. He refers to his children as his future. His sister is resettling with her husband, Jacob Hostettler, in Adamsville, TN. They will be the thirteenth Amish family to settle there. They are going to farm and teach their children their way of life … They farm to eat, but the soil and seed keeps providing more than they could possibly eat themselves … Herman Gingrich said it pretty well: “ We look kind of funny, but once you get to know us you find out that we can work together. We all have families and we all have to eat!” 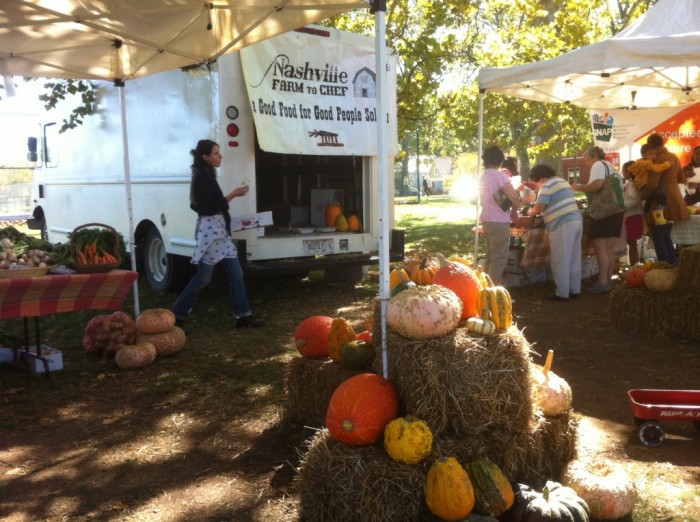 Sean Siple is the founder and managing partner of Good Food for Good People, managers of the West Nashville Farmers Market, the Bellevue Edible Learning Laboratory (BELL) Garden and the Veterans Wellness Wednesday Farm-Stand Project to name but a few of their accomplishments and responsibilities. For more information, go to Good Food for Good People