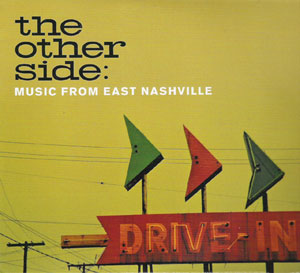 One evening while stopping by my favorite meeting place in East Nashville, The Family Wash, I overheard an interview being taped for NPR about the East Nashville music scene. There was talk of a new compilation being released that showcased some of the best and brightest from the 37206 zip code. Family Wash owner and music guru Jamie Rubin verified this information, and added that his own project, Circus Dog Serenade had made it onto the upcoming two-disk compilation.

Out of town engagements kept me from attending the packed the CD release parties, but fortunately I was able to get my hands on a copy. The CD is truly impressive, and confirms all the hype about East Nashville being a major epicenter of musical talent. “The Other Side: Music from East Nashville” walks the walk after so much talk from regional and national press about East Nashville’s Music scene.

The compilation was produced and directed by Eric Brace, frontman for one of Nashville’s finest acts, Last Train Home. Eric recently talked with us about his latest brainchild and his Record Label, Red Beet Records:

NS: You moved to Nashville From DC a few years ago with your band, Last Train Home. What precipitated the move?

Brace: The same thing that led to “The Other Side” compilation. There was such a music community in Nashville, that was always in evidence every time we’d come down from Washington to play. We’d started in D.C . in 1997, and things were going well, but when we were talking about making the leap from part-time to full-time band, it made sense to be in a place where there was more of a supportive scene. Nashville was always so welcoming, and every time we came here, there would be tons of musicians at our shows giving us great feedback and support. We discovered the whole network of musicians, studios, songwriters, not to mention the music biz side of things, with publicists, labels, promoters, agents, and all that… the things you need to be a successful touring band.

NS:Did the whole band move together, or was it one-by-one?

Brace: The rhythm section moved down first. That was bassist Jim Gray and drummer Martin Lynds. They immediately bought great houses on the East side, for prices that woulnd’t get you a studio apartment in Washington. Then I came down and spent time renting for awhile before finally buying my place on the East side too. But that’s it, of the D.C. line-up. It’s just the three of us who moved.
We’ve basically put together a Nashville version of Last Train Home with the three of us as the core. Then guitarist Steve Wedemeyer moved here from Austin in Nov. 2005, at our invitation to join the band (he’s from Houston, but we’d met him on one of our German tours), and keyboard player Jen Gunderman has joined us pretty much full time now too. We’re all East Nashvillians!

NS: A record label is an easy project in theory, but despite what folks might think, takes a huge amount of effort and self-sacrifice to make happen, especially when it comes to raising money and putting your neck out for artists. What made you decide to take a leap of faith?

Brace: I had a label in D.C. in the late ’80s, early ’90s, and found out the hard way what a tough row it is to hoe. I think right now is a pretty interesting time to try this, given the technological shift, and its consequential shift in the retail world. I’m trying to be really smart with this, and take it slowly, building some name recognition so that people will trust me and my partner, Mary Ann Werner. Trust us to only put out great music. It’s the music that made me want to do it. Being surrounded by such incredible talent in East Nashville just inspired me. Looking back on it, I might be being foolish, but if I’m in a position to get some of this music out in front of the listening public, then I feel I should do it.
And on the side, it will help Last Train Home get some attention when we release the next batch of LTH songs in February, 2007.

NS: The Other Side has received a warm reception from critics, and has invigorated an ongoing movement among the folks of East Nashville to establish an identity for the folks across the river from Music Row. What inspired this album? What make East Nashville important?

Brace: When LTH would play at places like the Family Wash, the Radio Cafe, the 5 Spot, the Slow Bar, there would always be great musicians in the crowd: Kevin Gordon, Joe McMahan, Amy Rigby, the list is endless so I won’t try to list them all. Very often folks would sit in with us and it would be this magical moment that could only happen on a Wednesday night in East Nashville. I’d go to Bongo Java or Lipstick Lounge or the Red Wagon and see musicians, songwriters, producers, studio engineers, all just hanging out, being incredibly friendly and supportive. It’s definitely got a different vibe than what people associate with Music Row, and people in East Nashville realise that they’re probably not going to be CMT or VH1 or whatever, and are comfortable making music that stands on its own. We’re not trying to encourage separation between East and West Nashville, we’re just recognising that there’s *something* going on on the East Side that’s worth noticing. It’s based on cheap housing (but that’s changing, so it’s worrisome) and great public spaces where all the music folks can hang out. Having said that, we’ve met plenty of great people across the Cumberland!!

NS: A lot of networking went into bringing together such a diverse roster of talent, and despite disgruntled rumblings from those who were omitted, the selections are actually quite inclusive. Could you tell us about the process of selecting your artists?

Brace: The initial thought was to put 12 great songs on a CD. But as soon as we started making the list, it grew to about 25, just based on our immediate circle of musical friends. Then once it was clear we were going to make it a 2-CD set, we just did a little more digging, and that’s when we got folks like Sergio Webb and K.S. Rhoads. I think we got our wish-list, other than Gillian Welch & David Rawlings. Maybe we’ll get them on the next one! (We did definitely hear from folks we overlooked, and many of them are harder rocking than most of what’s on “The Other Side, ” so we may have to do another volume next year, “East Side Rocks!”… we’ll see)

NS:Who were the most valuable players on this project? Those who helped you make it a realilty?

Brace: Mary Ann Werner, my sweetie, first of all. Then Peter Cooper, who helped contact some folks, helped record many of them, and kept up the encouraging banter! Also Eric Fritsch, whose Eastwood Studios are down the street from me, and helped record and tweak some tracks. Alex McCollough at Yes Master was great in getting all the various soundwaves into a coherent whole. And now that it’s out, Meghan Hayes (a D.C. songwriter recently relocated to East Nashville) is setting up the consignment deals around town, getting it into places (see below).

NS: What’s next for RedBeetRedords?

Brace: We’ve also just released “The Skylighters,” the debut by a band of the same name, made up of me, Martin and Jim (from Last Train Home) and two bluegrass heroes of mine from D.C., Mike Auldridge and Jimmy Gaudreau. They’re incredible, and we made a record of country, bluegrass, swing, gospel, country-rock… it’s great. So we’re promoting that and “The Other Side” to press and radio, hoping folks will notice. Then we’ll gear up for the release of the next Last Train Home record in early 2007. After that, we’ll take stock and see if it can keep going as a viable lable, releasing some more music by Eastsiders!
****
You can get your own copy of “The Other Side” from these fine local merchants!
The Turnip Truck
970 Woodland Street
Nashville, TN 37206
www.theturniptruck.com
615-650-3600V flowers.gifts
114 S. 11th St.
Nashville, TN 37206
www.seethev.com
615-262-2528Alegria
307 North 16th St.
Nashville, TN 37206
www.alegriagifts.com
615-227-8566