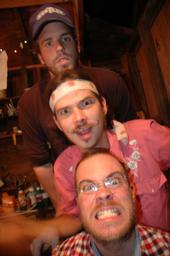 Richie Kirkpatrick is pacing back and forth on the concrete floor of the ‘charming’ porch area of The Springwater Supper Club, his thin hand lifting a cigarette to just below his handlebar mustache. Kirkpatrick is dressed in a dapper black suit, dark silk shirt and red tie this evening – appropriately maniacal attire for the foreboding Springwater on a cold and rainy October night.

After months of shows on many stages around the country with Bobby Bare Jr’s Young Criminal’s Starvation League, you would think a performer would be over the jitters, but tonight is not a normal performance for Ghostfinger. I fail to notice at first that no other members of the band are present. Onstage is a guitar, a chair and a kick drum. Tonight it will be Ghostfinger in its rawest form – just the pure unadulterated wit and genius of Mr. Kirkpatrick flying solo.

I’ve known Richie for some time. In 2002, while working at the University Library at Middle Tennessee State, a young Kirkpatrick approached me in the Political Science stacks while shelving books and said something to the effect of, ” Hey man, you don’t know me, but I’ve heard your music and think it is awesome. I was wondering if you’d give my CD a listen?”

Flattered and taken somewhat off guard, I happily obliged, and we started chatting. Turns out we were from the same hometown and had similar influences in bad 80’s pop radio. I was impressed that he would be so opportunistic, and while the CD was a rough demo, it was clearly the work of a tremendously versatile musician. What really impressed me, though, was his remarkable wit. Here was a kid who could do just about anything, and instead of struggling to corner a “sound,” he just let it all hang out like a good gumbo.

Four years and many stages later, Kirkpatrick has earned a degree in musical composition, but more importantly, the respect and admiration of indie-rock fans and musicians alike in Nashville and around the country, working as a sideman for various projects, such as the Mattoid, and now, as guitarist for the prince of Nashville Americana/indie rock, Bobby Bare Jr.

It’s difficult not to not like the tall, lanky mastermind of Ghostfinger. He has a wicked sense of humor, and a clever taste in clothing, from American Indian headbands, to western wear and leisure suits. His black handlebar mustache, a real rarity among indie-rock hipsters (or anyone for that matter) has become his unmistakable trademark.

As he takes the stage and sits behind the kickdrum, he speaks into the microphone, “Welcome ladies and gentlemen, to SPAACE… AACE… AACE.”

The mic has a heavy, almost comical amount of delay that is amusing. He picks up a gut-string classical guitar, which seems to be an odd choice for a body of work that ranges between house, country-rock, and heavy metal. After a few minutes, it makes perfect sense. Keeping time with his foot, I realize what an accomplished guitarist he is: using advanced shapes and arpeggios only found in jazz technique manuals.

The stripped down sound is different from the usual Ghostfinger show, but reminds me of how all these things begin: with just a guitar on the corner of a bed somewhere paying homage to the lexicon of rock gods. Kirkpatrick plows through the grungy progression of “Aminal Eye”, with its solid four on the floor: a composition that Mark Mothersbaugh would appreciate.

“Love my head”, a metal parody, is especially familiar to me: my friends and I had a similar song in the 80’s we wrote called, “Satan will Rise.” Like Kirkpatrick, we loved the guitar sound of metal madness, but couldn’t take the hair, the tights, the wanking solos, and the neanderthal lyrics seriously. “Head,” takes the crudest elements of mankind’s brutal nature, and makes an absolute mockery of it. Appropriate stuff in these times of destruction.

As the set draws to an end, Richie is covered with sweat. He quickly disassembles his compact setup and heads out in the crowd to talk to fans. Some kids don’t get Ghostfinger, but those who do, love it.

Ghostfinger will appear at the Springwater on Nov 24 with Apollo Up!