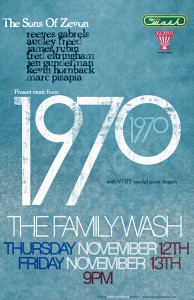 Last night’s 1970 tribute at the Family Wash was a mind-blowing experience.  The all-star cast ripped through covers like Midnight Rambler, Dig A Pony, and many more hits from an important year in Rock history.  Tonight is the second night of a 2-day celebration and reservations will be necessary to be a part of this intimate event.  Here is the official press release:

The Sons of Zevon, a crack collective of some of Nashville’s finest rock musicians — and the Brigadoon of cover bands — will unite at The Family Wash on Thursday and Friday, November 12 and 13, at 9:00 p.m. to pay tribute to a single year: 1970. Named in honor of the first artist the group honored, the legendary songwriter Warren Zevon, The Sons of Zevon reconvene only rarely to dig into the catalogs of iconic songwriters. The band, together with a steady parade of guest vocalists, has feted Neil Young and, in a famous 2007 bid to raise money to buy the Family Wash’s beer license back, Tom Petty. But the band has never tackled the output of a single year, until now.

Much like the semi-secret society The Sons of Lee Marvin — the existence of which has never been confirmed — the set list for the show and why 1970 was chosen, is a bit mysterious.

“I can’t really explain it,” says Jamie Rubin, Family Wash owner and co-founding member of The Sons of Zevon. “There’s just something frenetic about that year. While Vietnam was reaching its lowest point, Jagger got busted for pot. The Beatles officially broke up, Janis Joplin died, Black Sabbath was born and Elvis launched a comeback. Something crazy was happening. It felt like an era was coming to an end badly, and then all this amazing music came out of the wreckage. George Harrison’s All Things Must Pass; The Beatles’ Let It Be, The Rolling Stones’ Get Yer Ya Yas Out!, From Bonnie to Delaney…it’s amazing when you think of it.

“But why that year and why right now? I’ll leave that for you to decide.”

Joining Rubin to make up the rest of the Sons of Zevon will be Sons co-founder and iconic guitarist Reeves Gabrels, Fred Eltringham, Audley Freed, Jen Gunderman, Kevin Hornback and Marc Pisapia. Guest vocalists are being kept secret at release time.

“The Sons of Zevon come together for a variety of reasons,” says Rubin. “Whatever that reason is, whether it’s to get our beer license back, or to thank the community for their gracious support during tough economic times, the nights are always celebrations. Nashville has really rallied around  the bar these last two months, and this feels like a good way to celebrate and say thank you.”

The Family Wash, located at 2038 Greenwood Ave., at the corner of Porter Rd., in East Nashville opened in 2002, and quickly became one of the most-respected casual-dining restaurants and music venues in Nashville. It has won several Nashville Scene “Best of” awards, has been profiled in the Scene, the City Paper, The Tennessean and the Nashville edition of Where The Locals Eat and mentioned in GQ, USA Today, the New York Times and Rolling Stone (Germany).