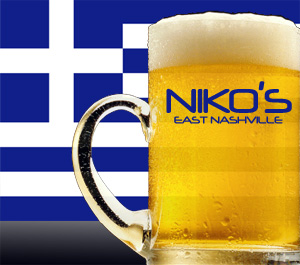 Anyone who has frequented the venerable Family Wash on the East Side likely noticed the place lurking across the street, with the fancy lettering on the windows that reads “Niko’s.” I first assumed it was a place that was closed down, but then was surprised to periodically see its interesting decor lit up and throngs of people having fun inside. Some friends and I even tried to walk in one evening to discover that it was a “private party.” We left disappointed.

Weeks later while enjoying conversation with some friends at the Red Door east, I meet the bartender, named Niko, who turns out to be the owner of phantasmal club of the same name.

“It will be up and running very soon,” he says.

That was months ago, but sure to his word, Niko’s grand opening to the general public happened a few weeks ago, and I am very excited about the brainchild of this tattooed fan of motorcycles and rock & roll originating from Greece. The atmosphere is very relaxed, and the patrons range from curious visitors to rockers and bikers.

Against a seemingly endless array of obstacles, ranging from regulations on water & sewer, to licensing, Niko pressed on for nearly two years to make this place a reality, and judging from the steady stream of business and support from the local community, it looks like it his here to stay.

Already popular with the late crowd, the establishment currently serves beer, but look forward to mixed drinks in the near future.
Thanks for your hard work, Niko!