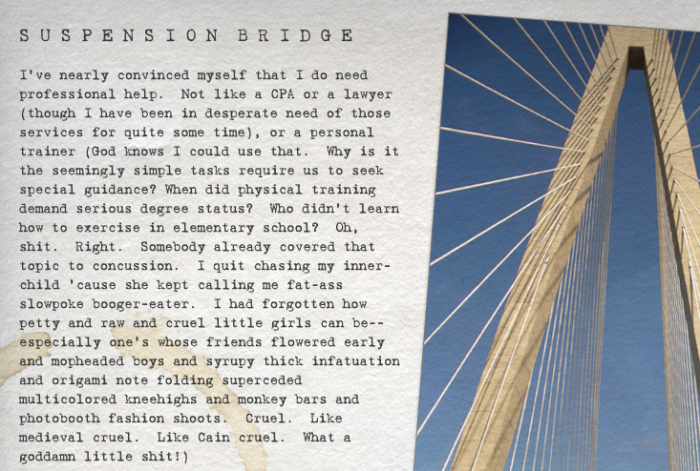 NOTE: This is an archived text version of the author’s work.
View the full multimedia version of Michael Chavis’ Suspension Bridge

I’ve nearly convinced myself that I do need professional help. Not like a CPA or a lawyer (though I have been in desperate need of those services for quite some time), or a personal trainer (God knows I could use that. Why is it the seemingly simple tasks require us to seek special guidance? When did physical training demand serious degree status? Who didn’t learn how to exercise in elementary school? Oh, shit. Right. Somebody already covered that topic to concussion. I quit chasing my inner-child ’cause she kept calling me fat-ass slowpoke booger-eater. I had forgotten how petty and raw and cruel little girls can be–especially one’s whose friends flowered early and mopheaded boys and syrupy thick infatuation and origami note folding superceded multicolored kneehighs and monkey bars and photobooth fashion shoots. Cruel. Like medieval cruel. Like Cain cruel. What a goddamn little shit!)

What I have decided (after strangling that little shit), and after nightless sleep for months, is to seek what my mother calls “Wise Counsel”. This after I told her my dream. The sky, mauve with streaks of dark gray smeared like soot across a miner’s sweaty brow, crouched low, closer than normal. Either that, or I was inordinately tall. Molly and I were walking in a park. Could’ve been any park except when I threw my head around to satisfy that curiosity that someone wasn’t watching me, I noticed the pediment above the Parthenon. Now, as far as I know there are only two full size Parthenons in the world. The original, atop the Acropolis (what a cool name for a hill). Yea. Silly. Sometimes I swear I’m still in seventh grade. But, Acropolis. And the one in Nashville. I’ve been to both. I’m pretty sure this dream Parthenon was in Nashville, though with dreams certainty sleeps with his sister, realty. So, walking by a Parthenon, gods, demigods, goddesses (I’m going to be a goddess for halloween. Wearing pleated linen and nothing else. Watch all those dogs slobber all over themselves, just wishing they could lick their own balls. Crap, now I’m gonna throw up–the shit that swims in my head. I swear to God, if I went blind tomorrow it wouldn’t be soon enough) and heroes and all mythology watching me and Molly strolling along like Sunday morning, and all of a sudden my scalp slips off my head and I nearly kill myself tripping around it. I look down and I know immediately what IT is, and instinctively I put my hand to the top of my head. Yep, my goddamn scalp just fell off. Not bloody. Not horror gore. Just there. Like common trash: a condom wrapper, a fast food cup creased at the waist. I knew it was my scalp, but it wasn’t my cut. At least not the cut I usually wear. I part my hair to one side or the other. It’s long, past my shoulder blades, and I don’t have bangs, despised ’em since second grade, can’t stand the feel of cold steel across my forehead. You might as well try and pull my fingernails off. Don’t, though, unless your fetish involves sharpened nails scratching your flesh off. This scalp had a butt-cut, parted right dead center. And again I reach toward my head, this time hands upturned lifting parlored trusses to my field of view. (This is why I wear my hair long. I’ve always felt my neck to be too short. My chin too close to my chest. The long brunette hair draws the eye away from this flaw. Especially in the summer when the glorious sun works in magical highlights.) But this scalp had a butt-cut. A butt-cut. Are you hearing me? And the hair was black. Like a crow. Monochromatic and shiny like a Japanese sidetable. You can just imagine the horror. Well, I reached for IT, and Molly just came undone. OH MY GOD. Apparently she’s looking at the top of my head now, but I elect to calmly place the scalp where it should be, at least where I suppose it belongs and we continue our stroll. Sky darker though still backlit and sonuvabitch if the scalp doesn’t come off again. But this time it doesn’t fall. It is clearly thrown. What The Fuck? As I turn to Molly, she has her hands on either cheek in an effort to deny a scream or keep her jaw from coming unhinged, one finger limply pointing up. The Greeks are coming out of your head, she whispers through clenched teeth. This is the sign. Or post. Or red flag. The subconscious, at least mine, cannot stand giving birth to myth any more than my bangs being cut. This is a dream, I tell myself, and apparently I agree.

The clock agrees. A base eight digital figure is dreamproof, a hallmark of reality, devoid of imagination, yet pure genius. Ten digits in one form. The decimal paradigm. Digital archetype. I focus on this comfort, a little too comfortably.

Next thing I know I’m in a confessional. I’m nowhere close to Catholic, but there I am in a staightjacket sweater and pleated skirt (not plaid in case you’re wondering. This is not that kind of dream, pervert) and I strain to see the Father. But there’s nothing there, or nobody there…until I look down and there’s a hogshead opposite on the floor. And I remember a story, a story I’ve heard over and over from kids who went to Catholic or Episcopal universities, where some evil trickster had placed a dead head, be it fish, or fowl, or swine, on the stoop, or the altar, or, God forbid, at the nave (I am nauseous again) and of course they and their cronies (there are always cronies) are immediately expelled, if not cast to the bowels of Hell Itself, but the darkness and the tightness of space is squeezing my neck like the waist of that fast food cup. I’m gasping for air, gulping, and I feel my chest shrinking, and just before the crush I am out.

Waking with a start–not from the dream, mind you. Apparently from passing out in my dream–who the fuck loses consciousness in a dream? Can you even call it “consciousness” in a dream. Seems like blasphemy, or at the very least a betrayal to the waking state. Maybe blasphemy from where I slouch, half on the prie dieux, half slipping down the wainscot below the crucifix. Wait. That wasn’t there before I passed out. I notice, not greeks this time, but blood trickling down my forehead. Jesus had kicked me in the head.

This is what I tell my mom. Oh, my dear, you must be horrified. No, these words are the imagined response I put in my mother’s mouth. Really, at first she is silent. Then she starts with the head rubbing. First at the temples, middle fingers rolling clockwise, then left hand slap to the lap, right hand stroking the scalp, brow to nape, silver hair cascading back into place like a stage curtain following the final bow. She is done. Past the drama. Past the double doors which greet the street. She’s ready to raze the theatre with all the authority of imminent domain and erect a monument, a gallery, a museum, in honor of her broken dreams. She finally looks at me and doesn’t speak. The eyes have it.

But I’m not done with play. She is. And I respect that. No more Shakespeare-in-the-park invitations for her. Belmeade West divorcee is her role. Nashua community theatre is mine. I just need a better director. A professional.