The apartment complex in Antioch, a suburb of Nashville and home to many of the city’s international communities, sprawls

over a hill, dorm-like three-story brick buildings terraced with streets and sidewalks between, filled with young children in the hour before sunset. Black haired, brown-skinned kids and adults in colorful clothing and a few women in headscarves indicate this is not your white-bread suburb. No, this is a swath of Southeast Asia right here in Nashville, where many refugees have been resettled and others come from less hospitable US resettlement cities to join family.

After meandering through the complex, feeling somewhat of an anomaly in this environment but not necessarily unwelcomed, I find the apartment I am looking for and knock on the metal door. While waiting for it to open, the smell of rice and beans and delicious foods I cannot identify wafts through the concrete hallway from many doors, and pots and pans clang through the walls. I am greeted by a smiling woman who welcomes me into the tiny, bare living room, where a white plastic top folding table and four plastic and metal chairs dominate the space. Two women are busy in the kitchen, and as I slip off my shoes I am offered a bottle of water which I accept gratefully even though I have my own water bottle and I am almost embarrassed to accept this offering due to humbleness of the abode, but am thankful of my mindfulness of this custom and know enough to not refuse it. 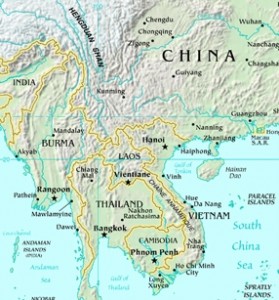 It is loud in this simple apartment with the windows open to the busy street below, and the Burmese chatter of the women cooking. My purpose here is to record an interview to be used in a social justice choreographic project on immigrants and refugees. Thus, in search of a quieter place, my new friend and I walk outside to talk, past three rows of buildings, up the steep path to the abandoned tennis courts near the top of the hill where the view of the sunset rises above the apartments. Here, we sit on the concrete and talk, and she tells me the story of leaving Myanmar (also known as Burma), of the Civil War she fled, of the isolation, confusion, fear and uncertainty of coming to a land so foreign. She speaks of how, in her homeland as a child, she is not even allowed to say what she wants to do when she grows up, she tells of how her brother, a forced soldier captured during the war, dies of malnutrition and health complications from his time in a horrific military prison. She speaks of her fear of going out after dark in her homeland, for there are no lights where she lived, no phones, no sense of safety. She tells me she cannot contact her parents, still in Myanmar, and only knows if they are okay when, every few months, they find a way to call her. She tells me of the fear and challenges in this strange new land when she was resettled by a refugee organization in America, of being lost and disoriented and deeply frightened in the ice-covered streets of her first US home in Iowa, unable to find her way back to her new apartment, unable to speak enough English to ask for help. She expresses her deep thanks for the one friend with whom she traveled so she was not completely alone, and her amazement and deep gratitude to live in a country now where one can flip a switch and have lights, where water comes from a tap, where she can read the news, go to school and where many people are so kind and helpful. She speaks of the inclination of most Burmese in America to not ask questions, to not speak out, and how some have come from such primitive and natural environments that they do not even know how to write their own name, much less be able to learn and speak this new language, and understand this new culture. She tells a story of two friends swindled by a car dealer, who took advantage of their lack of communication and negotiation skills. She says she is called to help.

We talk for about an hour, up there on the hill as the children play and the sunlight fades. And all the while, I feel so privileged to hear this story, to be in this place. As I gaze out over the complex, I hear in my heart her story echoed by dozens of others living here. Only their stories may even be harder, for there are many who speak little or no English, and who grew up without learning to read or write in their own native tongue. Navigating through this strange culture and unfamiliar land must be like trying to find one’s way in thick smoke; everything is partially obscured, it’s difficult to breathe freely, and one can only see a few steps ahead at a time. How does one traverse the process of enrolling a child in school, applying for a job, obtaining a driver’s license to be able to drive to the grocery and buy strange products with unintelligible labels when one cannot even sign one’s name to a check, much less fathom this culture’s concept of money being represented by a piece of paper?

The light has faded slightly by the time we begin to descend the hill to the apartment, but it is not yet dark. Still, the place is quiet. All the children have left the playground, the concrete stoops, the sidewalks. They have returned to their apartments to gather round the dinner tables with their family, much as they may have gathered round the cooking fires in a land far away in time and miles. There is a sense of serenity in this near twilight, of a brief time of clarity when the fog of this new land has dissipated and all that matters is a meal, with family, sheltered and safe. As I drive away in the growing darkness, tears of gratitude for this privilege of being an observer in this world for just a short time, and sorrow for the knowledge that this humble world I’ve just left, with all its cultural and financial challenges, is miles better than the one these people have fled, chase me home.