Folks suspected it was arson that started the fire in the cellar of my Grandmother’s house in the early hours of that November morning. Kids, they speculated, walking along the railroad tracks that ran along side my grandmother’s yard, but they never found proof. Trouble tends to find its way in through a split board in a fence every time, you just kind of figure.

We got the call some time in the quiet hours before the sun was up. I remember the excitement of being awake when I shouldn’t be, as my grandmother and Nonnie arrived at our house still in their nightgowns. My grandmother had always been my ally — as the first grandchild I could do no wrong in her eyes, and I adored her beyond words. My love for Nonnie, her older sister, was more of an obligatory kind of thing. Caustic and a little bit mean, she had a way of sizing you up with her one working eye, and no matter what you did, you just knew you would always come up just shy of acceptable. They moved into our house that night, my Gram with her fondness for sweet coffee and Ritz crackers and the deluxe edition of Scrabble, and Nonnie, with her wheelchair and the stumps of legs that had long been surrendered to the humorless gods of gangrene and diabetes. Gram stayed upstairs in the room with my little sister, who still slept in a crib. Nonnie stayed downstairs in the den with the family stereo, the garish floral print sleeper sofa and a portable toilet pushed up against the wall, because her wheelchair could not fit through the bathroom door.

The structure of their house withstood the fire for the most part, but the sweet, acrid stench of smoke permeated everything, and there was water damage to sheet rock and flooring. Since I had spent most of my life gathered around tables with these two women, the next six months of being crammed into a three bedroom house with them while their house reconstructed was not particularly strange or even uncomfortable. In truth, my grandmother was the closest thing I knew to comfort. I had learned early to steer clear of Nonnie, however, and to never ask her questions at the risk of being reprimanded or ignored altogether.. To be fair, since she was now beholden my parents, she seemed slightly humbled, and while this new humility did make her somewhat sweeter and slightly more approachable, I still didn’t dare to chance more than a few courteous exchanges before meals and the expected goodbye kiss before school. Beyond that, my routine was scarcely interrupted at all by their presence, with one mildly aggravating exception. It had been my habit to go without shoes while in the house. In general I hated wearing shoes, but I particularly enjoyed sliding across the expanse of brown and red faux brick linoleum kitchen floors in just my socks. If I started at the threshold of the dining room, I could really work up some speed by the time I reached the kitchen table. Recently I’d noticed, since somewhere around the time of the arrival of Gram and Nonnie, that my socks were getting mysteriously and annoyingly damp when ever I moved through the kitchen. I assumed that maybe people had been spilling things more frequently for some reason, so for a while I really didn’t give this phenomenon much thought. One morning, however, I woke up on the wrong side of the bed and all crankiness, real and imagined, was magnified to an unbearable level. I don’t know if it was the combination of the loud kitchen and not being a morning person, or if I was just kind of pissy because of the way Nonnie pronounced the word potato with a b sound instead of a p… whatever it was, when I stepped into the now familiar puddle as I entered the kitchen that morning, I immediately exploded with something like “ Why the hell is this damned floor always wet!?!” Even as a child I enjoyed the use of profanity for emphasis. Without pause, Nonnie looked up from her paper and responded simply, almost complacently, “It was me”.

It took a moment for me to connect what she had said to the dark spreading stain I had noticed on the carpet in front of her portable potty in the den. My self conscious, twitchy pre-adolescent world just kind of imploded on spot when the force of the realization finally hit me that for months I had been skidding through a trail of my Great Aunt’s urine in socked feet. Nonnie and Gram moved back into their almost like new house soon after that harrowing little occurrence took place, but it would be years before I was comfortable enough to go without shoes in the house again. 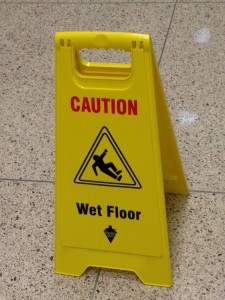