When it came down to the gritty stuff of exploration, there was no place better than the lush, mysterious wilds of my aunt’s back yard in the white bread suburbs of South Windsor, Connecticut. We spent endless afternoons crawling along the sewer easement, excavating the tombs of pharoahs and discovering new genera of insects. The two-seater swing set, our space ship, carried my cousin and me to mystical lands with strange customs and foreign tongues. We imagined that the sheets and towels hanging on the clothes line were the colorful tapestries of the exotic places we were visiting. Our travels and explorations were always carried out with the studious professionalism of scientists. We made certain we were supplied with the necessary rations and accessories for every mission. Our most prized instruments were small squares of plastic encasing protracting magnifying lenses. My cousin had a red one and mine was blue. 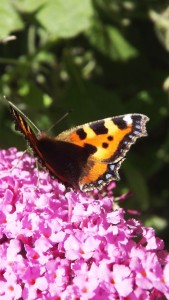 The experiment we had planned for this particular afternoon required the big guns. It also required significant preparation and gathering. There was an old pine tree that stood gloomily on the edge of the drainage ditch. Half the yard cowered beneath its shadow and was covered with its scattered needles. We took off our sweat shirts and filled the hoods with these, making a small mountain of this material at the approximate heart of my aunt’s garden. We also gathered small sticks and dried leaves, unsure of the precise ratios needed for our procedure. Figuring that we might want to have several tests, we collected more than we thought we could possibly use.

By that time we were old hands at capturing sunlight with our magnifying glasses and focusing tiny pinpoints of white hot rays on leaves or random pieces of wood,  causing them to smolder and char. Today we were taking things one step further – our mission: actual fire.

Earlier, as we had passed through the kitchen with our Tupperware thermoses of grape Kool-aid and our bologna sandwiches, my mother and aunt were sufficiently distracted with their own conversation to accept our muttered responses of “nothing”, when they asked what we were up to. We figured that we only had a small window of opportunity to act before they noticed we were being suspiciously quiet and came out to check on us.The pine needles made a good, solid foundation on the mulched earth between the coreopsis and marigolds. We put a small layer of sticks on top of them, then added another layer of pine needles. I pulled a pristine roll of paper caps out of my pocket and gingerly placed it on top of the pile, and we covered these with the softest layer of dried leaves. We were ready.We flipped a coin to determine who would hold the magnifying glass, since my cousin was now savvy enough to no longer buy into my “I’m older so I go first” reasoning. As luck would have it, when I removed my hand from the quarter, heads was revealed. With as much steadiness as I could manage, I held the disk of glass above our makeshift pyre and adjusted the height and angle until the most precise point of light was achieved.
Smoke began to rise from the leaves almost immediately and then with a dramatic FWAA-AAP! the roll of caps ignited, setting the whole mess ablaze. We stood back slightly, transfixed by the beautiful scene we had created, our hearts pounding. A thin layer of smoke gathered around us like fog as the beautiful flames leapt higher and higher. We quickly gathered more sticks and pine needles, wanting the magic to last, but my aunt, who had witnessed our antics from the kitchen window above the sink, came running out with a dish pan full of water, ruining our fun for the afternoon and sending us to separate rooms to think about what might have happened if she hasn’t seen us and we’d actually managed to catch the house on fire. Play time with my cousin typically ended this way, with some kind of lecture and the confiscation of Barbie dolls sporting buzz cuts or, as in this case, our precious magnifying glasses. As I sat brooding in the guest room I plotted our next experiment. Perhaps this one should take place in the garage, hidden from the prying eyes of my mother and aunt. I thought I had seen a small torch on my uncle’s work bench that looked inviting. I wondered how that thing might work…