I was a late night, insomniac worrier when I was a child. I would lie awake obsessing about whether 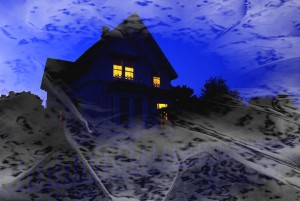 or not my stuffed animals were cold, the pressure eventually becoming so intense it would force me out of bed in a sort of twitchy fervor to tiptoe around the stillness of my nighttime room, collecting little blankets and bits of fabric to cover them.

I worried about starving children in far-off places. I worried about demonic possession, earthquakes and breaking the Ten Commandments. I worried about that freaking Indian paddling his bloody damned canoe through the trash-strewn rivers of my Saturday morning cartoon commercial breaks and into the feverish thoughts of my poor, intense, uptight little head.

Mostly, though, I worried about the mortality of my parents. The thought that they might die before me gripped me with such fierce terror that some nights I would lie awake for what seemed like hours, paralyzed.

Some nights, more than thirty years later, that same fear whispers its way back into the edges of my consciousness, and I find myself reasoning with something close to panic.

I have lived on my own, by my own terms now, for over twenty years. I own a house and have animals that depend on me to feed them and provide them with cute little sweaters in the colder months. I have my own business. I manage my life fairly well most of the time.

And I cannot imagine a world without my parents. Just the thought of it brings me to the edge of such a wretched chasm of grief I cannot begin to understand it. Mostly I cannot imagine not being able to call them every weekend.

We have same conversation, or at least variations on it. It goes something like this:

If Dad answers he gives a brief run-down of whatever activities they have most recently been engaged in—feeding the chickens, raking leaves, painting the guest bedroom. There is a brief pause, during which I start to respond. Apparently, that is his cue to ask if I want him to put Mom on the phone. I think the telephone freaks him out a little. There is some muffled static and what sounds like the phone going through the spin cycle of the washing machine, then Mom picks up, pole-vaulting into such a dazzling array of verbal gymnastics that I am often struck dumb within the first few seconds.

For the next several minutes, between drags of her Kool Light 100s, she lays out the map of what she has cooked since the last time we spoke, what she is baking for the neighbors, the status of the dogs, squirrels and birds of the neighborhood—frequently interrupting herself mid-sentence to deliver live updates on what the neighbors are doing. She asks if I have seen a particular television show. After I explain for the 1,289,457th time that I do not watch television, she gives a blow-by-blow of the storyline. Then she asks about the weather here, comparing and contrasting what is happening there. Sometimes there is an update on some drama happening with extended family.

As caffeine-driven and sometimes surreal as these conversations are, they are a sort of touchstone in my life, something that keeps me strangely grounded—in a frenetic, bat-shit kind of way.

How does one prepare for the absence of that sort of thing?

I mean, they are getting older. Hell, I look in the mirror and I can’t begin to reconcile the forty-something-year-old woman staring back at me with the kid with the shaved head at whom they used to demand, “take out that damned nose-ring!” any time we went out in public.

In my mind they are still younger than I am now. And I am still the little girl with the covers around my head, holding Elephante, my cleverly-named stuffed elephant, and praying that I would go before them.

Chances are I won’t. I mean, none of us can absolutely know when our time will come; not a moment here is a given. But miraculously I survived those long, restless nights, the angst-ridden teens, the Summer of Love and Excess that marked my twenties—I never imagined I would make it past those years—and then my thirties.

And my folks are now in their late sixties. Even though I somehow vaguely suspected as much might someday happen, I never really prepared for it. I have no idea how to do something like that.

My prayer is no longer that I go before them. I actually kind of dig being here. There is a lot I want to see and experience before I go. In fact, the older I get, the more in love with being here I become. My prayer now is that, when they do go, they go gently. That they know that they are loved. That they go fearlessly. That they go without worrying about me or my sister. That they go having lived the life that they wanted for themselves.

Hell, I reckon that is my prayer for all of us.