I open the oven and pull out my laptop.

I need to finally sit down and write out all the things I want to ask the Robbers. 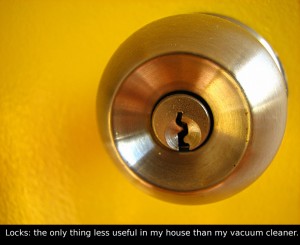 I want to know, first off, if they bothered my cat.

He was scared for days afterwards, but I can’t be sure if it’s their fault, or maybe due to the fact that I walk around the house tearing open shower curtains and flinging open doors when I come home.

And I’m just curious, did they knock first?

Would I have met them at my door if I’d been home?

Would we have exchanged pleasantries, “Oh, I’m sorry, ma’am, I’m at the wrong apartment. Have a nice day.” ?

Do they know me?

And now, do they feel like they know me?

After all that rummaging through my things, I would imagine they might feel we’ve grown pretty close.

I really do wonder what they thought of my furniture.

I spent a lot of time picking it out and putting it together. I’m just curious about their thoughts upon entering:

And how does it compare to the other places they broke in?

Could I get a ranking?

Maybe give out some awards…

Most Valuable Possessions in a Single Drawer

I imagine I wouldn’t have been up for that one when they opened the drawer full of cat toys.

And I know they opened it.

And I know they rifled through it.

Yes, Robbers, you think I keep my gold coins and fine furs under the green feathers and jingle balls?

You think you can sell that catnip on the street?

You think maybe the girl with the TV that was clearly bought in 1994 might hide the good stuff in the closet?

Well, maybe. But how disappointed were you when you found cardboard scraps and acrylic paint?

Really Robbers? You think I have anything you need?

I’d like to ask then what they were looking for.

Because I can’t find anything missing.

But I know they looked through everything.

I’d really like to know if when they kicked in my door if they had the thought “you know…. it’s like this door is the lid on a jar. And then you kick it in, and the top pops up. And if you read the top, it says in plain language that if the seal has been broken, you should discard immediately.”

Did they think that? Because I doubt they did, but it’s all I think about.

But I can’t discard this place.

It’s where I live.

…..I wonder if they considered the fact that I’d only lived here for 3 months.

And that my first night home alone was Valentine’s Day… Every noise caused me to run to the door, look out the peep hole, my finger resting gently on the 9, ready for the 1 and the other 1.

And again, it was Valentine’s Day, my senses on high alert. I certainly couldn’t sleep, but I’d gone to bed anyway. So what is that noise? Oh my god. WHAT IS THAT? Should I call the police? I should call the police. Why don’t I have a gun? Holy mother of God, someone is breaking in next do—

That’s….that’s the neighbors. Doin’ it.

It is Valentine’s Day, after all.

But despite all of this… Despite the timing, despite the anxiety every day walking up the stairs wondering if the door will be closed. Wondering if my cat will be hiding behind the washing machine. Wondering if I really do need to discard this jar if the button is popped up…What I really want to know is if they ever considered there might be a laptop in the oven.