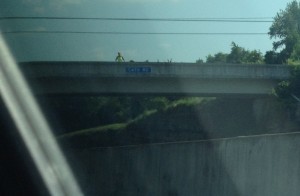 You just never know when she’s going to appear. The first time I saw her I was a bit surprised and caught off guard, but nothing huge. I didn’t even take my foot off the accelerator for a second. But then, there she was the next day, in the same spot, in a bright yellow sports top this time, still waving. And the next day it was a hot pink shirt, and she looked even happier. We saw her for five days straight, so that I’d come to expect her energetic smile and easy wave, to look for it eagerly on the drive home so I could return her joy in a wave I hoped she saw through the barrier of my front windshield at 65 miles per hour, even while my 13-year old son, who is at that easily embarrassed, keep-to-yourself stage, tried to prevent me from waving. It was a little flash of pure joy in the banality of our daily commute.

And then she was gone.

Her absence left me wondering. At first, I thought it was one of those social experiments you sometimes see in Facebook videos:  someone counts how many people will be willing to shave their armpits on the subway or some such interaction with strangers, and draws some kind of conclusion about humanity from the results. I imagined she was a non-traditional student doing an experiment about how many people would wave back at her in a five-day stretch of time, counting the wavers and not wavers with some hidden, crunching numbers about what color shirts got the most waves.  And after a while of not seeing her, I forgot about her for weeks, months.

And then one day she was back, wearing a darker color shirt, still waving a bit but not as energetically. And the next day she was there wearing a black shirt and not waving at all, just leaning on the concrete rail and intently watching the cars speed by on Briley Parkway East from her usual perch on the Cato Road overpass, a rather non-descript road with no entry to Briley situated between the Ashland City and Clarksville Pike exits. And then I started worrying; was it me? Did I not wave soon enough? Is she giving up hope for the return wave? How many times might I have driven under this very overpass, listening to NPR or talking to my son as we drive home from school, and not even noticed that she was there?

And again, I started wondering. Is she separated from a child? Are her appearances during the weeks when they’re with their dad, and knowing her kid takes that route everyday, does she stand there in the hot sun waving so that her child can see her usually happy face and know a mother’s love? Or maybe she’s lost custody of them and this is the only way she knows she can maybe get a glimpse of them zipping by; a split-second flash to yell with her wave and smile; “I’m here. I still love you so much.”

But why did she lose custody of her kids? She really looks nice. But maybe she’s not a mom after all. Maybe she’s a stalker. And this innocent-looking wave is really creepy and downright scary for the person being stalked. “Holy crap – there she is again and she knows where we’re headed!” Maybe the black shirt, no wave day was to say “Hey. I’m done being friendly. This shit’s about to get real.”

One day after the black shirt day she really threw me off by standing on the opposite side of the overpass, waving at the westbound traffic. WTF? The people she’s looking for are going east, like me. And then it hit me; she’s there for everyone. She just exists – a happy, almost surreal occurrence that you can’t always count on, but when it happens, soak it up and remember what it’s like to be human and part of the crowd. Get your trumpet, get your drum and join the parade of life, finding those moments of surprise and joy and connection when you can, without analyzing the hell out of them.

And for God’s sake, smile and wave back.