The air conditioner is out again,
[I got a pocket, got a pocketful of sunshine]
it’s late July in Tennessee,
[I got a love, and I know that it’s all mine]
and the people outside want their money back.
[Oh. Whoa-oh-oh.]

The sales manager is sitting at her desk by the front door, 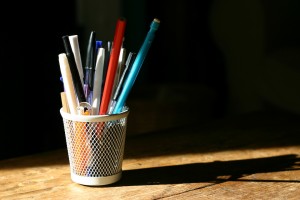 [Do what you want, but you’re never gonna break me]
but the door is locked, and the lights are off,
[Sticks and stones are never gonna shake me]
and we can’t go outside until the crowd disperses.
[Oh. Whoa-oh-oh.]

We’ve been sitting in the dark, sweat dripping down our faces onto our business casual pants. Nobody is talking about it, but the owners of this business, the people who sign our paychecks, owe a lot of people a lot of money. And we’ve all been instructed to stay away from the windows, because they have no intention of paying any of it back. The only people outside who know we’re in here work for a local HVAC company. They’ve been coming back day after day when the owners, the authors of the “DO NOT TOUCH THE THERMOSTAT” signs, turn the temperature down so low that the whole system freezes up, leaving us baking in a dark oven humming with desktop computers.

People are getting laid off ten at a time. The possibility of collecting unemployment is the only good news any of us have heard in weeks. I have the unfortunate luck of being both good at my current job and very bad at finding a different job.

I used to answer phone calls every day, one after another, helping old people restart their old computers, politely obliging when women refused to speak to me and asked to speak to a male technician, and speaking in soothing tones to that furious lady who sounded like Gloria Estefan and called five times a day. This earned me the promotion to standing for 12 hours a day, walking over to whoever had a difficult question or a difficult person on the phone that they couldn’t handle on their own. They’d put a red cup on the shelf by their head, and I’d know they needed my help. One lady always had her cup partially obscuring her distraught face, craning her neck to see if anyone was coming to help while she stalled whoever was on the phone. Every time I helped her, she would cry and thank me for being kind and having patience because no one else ever did. She sat at my old desk, where I had been when the elderly lady I’d helped many times before, called after having a stroke. She had difficulty speaking, and she couldn’t find the words she needed to say to describe the problem she was having with her computer. I sat with silent tears streaming down my face for two hours, suggesting possible problems and solutions and listening to her sigh and breathe and get so frustrated with her own brain that she told me she’d call back later. She never did.

I dodged questions about who I was dating. I pretended to know how to eat with chop sticks. I made several clammy-handed flights across the country. I bought a coffee thermos. My hair started turning grey. My car died, and I chipped my front tooth. I got laid off the day after asking if we’d ever get insurance. My last paycheck bounced.

But now, now there’s just this heat. And this sales manager by the door – loud, off-key, an “Office Momma” of a woman – not letting anyone in, answering the angriest of the phone calls, and playing a single Natasha Bedingfield song 45 times in a row.

In this moment,
[The sun is on my side]
all I recognize are questionable taste in music
[Take me for a ride]
and blind faith in leadership.

But now
[I smile up to the sky]
years later, I can see she was just trying to convince herself
[I know I’ll be all right]
to keep going.