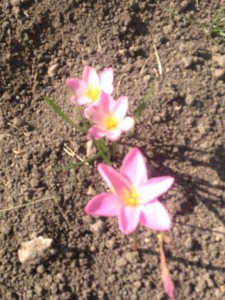 She materialized suddenly from somewhere behind the scattering of weathered shacks and makeshift chicken wire livestock pens, banging erratically on a crude, handmade goat skin drum. As she approached, I imagined that for some reason she had randomly chosen to include us in some sort of strange, painfully intimate ritual, enveloping our group of dusty, bedraggled gringas in her circle of oddly timed, albeit sweet mojo. I had assumed she was approaching us while chanting some sort of intricate prayer, because sitting there by the side of some nameless dirt road in one hundred degree heat, that just kind of made sense. As It turned out, though, what she was doing was singing. Her eye contact was searing, and her smile resplendent, even with almost an entire bottom row of teeth missing. Some of our group began to shift uncomfortably when it became apparent that she intended to settle there among us for a while, but I was absolutely transfixed with her performance. She was standing directly in front of me, burning up the air there in the shade of the Perul tree, while the Mexican sun baked the beauty and squalor around us. I couldn’t decipher the language she was singing. I wasn’t hearing the words exactly, the experience was somehow more visceral than that. The sounds she made seemed ancient, and I imagined them creating a vibrant, almost palpable road to the mystic. Clearly the woman had not in any way been trained to sing. Her voice, though not entirely unpleasant, was rough and unpredictable. It was her passion, the way she utterly gave herself to the expression, that transformed everything it touched, making us all a part of it. The song ended as abruptly as it had started, then she paused briefly and translated for us, her english surprisingly good: Do not cry for me. I am in the trees and the flowers all around you. I am here with you in all that is good, watching over you. The rains will come and make things green. There is good in what is green.

Then, before I could find my way back down to the stone wall I was sitting on, she made her pitch. She had once been a dancer but she could no longer find that kind work now that she is old. She explained that these days she had to sing for money. Maybe we could give her a little something for this song she had shared with us?

Most of our group had long since shifted their attention to the canned tuna fish and crackers we’d brought for lunch, or on the man with the box of tiny clay heads and figurines he now displayed on the wall, thousand year old trinkets he and his family had found in the fields by their houses which sat on the ruins, trinkets he brought out for the white tourists who came sporadically to gawk at the murals that were still visible in the excavated parts of the barrio where he lived. But not me. The old woman had cast out a line, and it plunged deep into my chest, reaching into that sacred little corner of my heart that celebrates the wondrous and absurd. On its way back out, it grabbed the little wallet I wore suspended by a leather cord around my neck, and it tore out fifty pesos, which isn’t much. I had paid that amount just days before for the ridiculous straw hat that was now keeping my skull from catching fire, thinking that the same amount in the states wouldn’t even pay for my regular Starbucks fix. The truth is, I had hoped that some of the other women in our group would give her a little money too, because I didn’t want to be the only privileged white asshole benevolently doling out pesos that day, deeming her work sufficiently worthy. But surveying the cluster of us, she read that no one else was putting out that reciprocity vibe, so she smiled, said a brief goodbye, and made a hurried bee-line for a nearby field where more tourists might potentially be lurking. She was gone before I could chase her down waving more crumpled bills in my hand, though I wanted to. She vanished into the haze of goat shit and dust like half a breath, like she and her surreal singing had never been there in the first place. Truth is, though, I know by the mark she left on me that she had been there. In her absence, I found myself grappling with the silence, with what it revealed of my own heart. How to reconcile my life back home with the woman she had sung to? How to reconcile a world where an old woman begs for money from tourists who mostly do not see her? How to reconcile that the sandals I was wearing cost more than she probably spent on food in a month? How to reconcile that life isn’t fair, and it isn’t comfortable, but it’s still aching and beautiful. That woman’s song didn’t speak of these matters – her song was simple and it expected nothing in return, only accepting what was offered up from the heart. Still, it spoke to these things struggling in me, the things I carry as I walk. My heart is still a bit sore – and still soaring a bit – from being touched by that awkward, oddly confident drumming, by words sung in an unfamiliar tongue that laid out worlds in front of us. The image of her still burns me a little even now – her once white dress, the red shawl, her gnarled hands and beatific smile. She is in the trees and the flowers that are all around me as I walk. She is in all that is good and green, even in this sometimes lonely, dissonant city so far away from the dirt roads she travels, shaking occasional tourists down for change in exchange for a song. She is with me, reminding me to breathe, to be touched, to allow myself to be swayed, if just for the half breath of a moment, by the beauty happening right in front of me.