On May 16th, 2017, on the same day that Turkish President Recep Tayyip Erdogan visited US President Donald Trump at the White House, protesters gathered at the Turkish Embassy in Washington, D.C. to express their dissent with the Administration’s decision to embrace Erdogan. Turkey’s President has unleashed a massive government attack on his own people and their human rights.

For nearly a year the Erdogan government has been cracking down on Gulenists, resulting in the detention and jailing of over ten thousand citizens without due process, the closing of more than a 100 media agencies, the jailing of journalists, the wholesale dismissal of the judiciary body and usurping the governing powers of the Parliament and consolidating it in the office of the President.

Context requires a bit of history to understand the story that follows. There are thousands of people being removed from Turkish society and placed in jail, kept from using their passports and having their assets seized. The justification for this heightened stormtrooper style roll-up of members of a Muslim sect started with a couple hours of staged tension on a hot summer night in 2016.

The “Coup Attempt” and the Purge

According to Turkish and US media sources, on July 15, 2016,  just before midnight Turkish time, a dozen or so military tanks and less than a hundred uniformed military rolled out to block one side of a bridge that services traffic into Europe and take over a small private TV station. Some social media platforms were jammed and internet service was slowed.

An announcement was made on the tv station that the “political administration has lost all legitimacy has been forced to withdraw.” At no time was a credible threat to the Turkish government, but President Erdogan unleashed citizen vigilantes via a Facetime appeal via CNN and deployed helicopters that dropped bombs and riddled the streets with bullets. Military and police forces liberated the bridge and the media outlets in less than two hours. 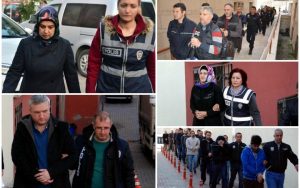 Erdogan’s response was a laser-like purge of members of his country who identify as Gulenists. This dramatic event was a continuation of a slower purge that started nearly six months before. In a matter of hours the loyalist military had swept up the “disloyal” military. Blame was set on the shoulders of a US based cleric who immediately denied his involvement in this outburst by Turk military members. The Alliance for Shared Values said immediately “we condemn any military intervention in (the) domestic politics of Turkey.” Erdogan called for Gulen’s extradition from the US.

Who are the Gulenists?

Fethullah Gulen is described by his supporters as a moderate Muslim cleric who champions interfaith dialogue. He has held interfaith dialogues with the Catholic and Buddhist scholars and leaders. also met frequently with rabbis and Christian priests in Turkey. He accepted self-imposed exile in when he moved from Turkey to the United States in 1999 and settled in Saylorsburg, Pennsylvania.

In Turkey and all across the globe, Gulenists advance a movement known as Hizmet,  an initiative inspired by Gulen, who espouses what The New York Times has described as “a moderate, pro-Western brand of Sunni Islam that appeals to many well-educated and professional Turks.” Hizmet founded Non-Government Organizations that, until the crackdown,  operated hundreds of secular co-ed schools, free tutoring centers, hospitals and relief agencies.  They are credited with addressing many of Turkey’s social problems, both locally and Internationally.

A handful of refugees who recently escaped Turkey are living in the Middle Tennessee region and have met with The Nashville Skyline to recount their experiences since the purge. Told in Turkish without tears or sentimentality,  the picture they painted challenge the imagination. The sum total of family, career, place and cultural, security and ambition were all taken away from these families suddenly and dispassionately.

Their anxiety was palpable as they each explained how government officials had staked out their friends and family who remain in Turkey, monitoring their movements, communications and  financial transactions. They experienced financial ruin caused either by continuous harassment (the Union Organizer) or through the direct seizure of assets (the General Contractor). These people had held successful positions as leaders in their respective fields. They still have extended family they can no longer see or speak with because of the fear of dire consequences to all parties.

So is it any wonder that the Turkish security team, when faced with lawful free speech outside their embassy, broke through police lines and beat down a handful of participants at the protest. As this piece is being scribed, a candidate for Congress, a Montana Republican named Greg Gianforte, has just been charged for assault for “body-slamming” a reporter for asking a question about Trump Care. He won election. More and more people claimed they are threatened by the freedoms we have long taken for granted and have sanctioned violence to inhibit them.

Time for Reflection and Action

Does a government declaring a “state of emergency” based on a questionable “coup attempt” used to justify rounding up thousands of people and stripping them of their liberty and freedom align with what our definition of democracy? Should this disqualify Turkey from continuing as a member of NATO? Here is the first two lines of the preamble of the original Treaty (the T in NATO):

“The Parties to this Treaty reaffirm their faith in the purposes and principles of the Charter of the United Nations and their desire to live in peace with all peoples and all governments. They are determined to safeguard the freedom, common heritage and civilisation of their peoples, founded on the principles of democracy, individual liberty and the rule of law.”

If we do not stand against tyranny here and now, when and where do we stand against this slide down from our high perch of our hard-earned, if imperfect democracy?  Can you imagine a more totalitarian, no checks-and-balances society with only one approved way to speak, worship and congregate? Who do you want to be now?

Listen to the stories of these refugees, persecuted because they have embraced an Islam of love and tolerance. Try to imagine their tragedy and decide who you want to be in this moment. How we respond to these times may foreshadow our ability to stand-up in the future and claim any vestige of American exceptionalism? It is times like this that define us …