For many people, the main objective of the holiday season that spans from late November through the end of December is to get it over with. Sure, there are ideally other things involved, like time with friends and family, celebration, being thankful, eating too much… But these are just stepping stones from point A (Before the holiday season) to point B (After the holiday season). Not only that, but the entire national consciousness shifts. Amidst the statues of Mary and Joseph with sheep, goats, and a baby, the twinkling lights, the flapping bows, everything changes. And we can’t help but change along with it.

What causes this? Maybe it’s the incessant holiday music oozing out of every storefront. Or all the traffic. Or the pressure to have a picture-perfect moment. Or maybe it’s the dissonance that arises when the incoming messages are all so contradictory:

Love thy neighbor, unless this particular neighbor also wants that 10 dollar Blu Ray Player, in which case, trample thy neighbor ;

Spend time with your family, unless you’d rather be shopping, in which case, spend money on your family ;

Spread good cheer, unless someone takes your parking spot, in which case, get out of your car and wave your fists and shout, foam and spittle flying from your mouth onto the antlers of the surrounding minivans.

With all these mixed messages, poorly constructed nativity scenes, and unpleasant songs about a fat bearded man watching us sleep, there aren’t many options for handling this whole situation other than to fall into some sort of semi-vegetative defense mode. Going through the motions, buying our presents, putting on our Santa Paws socks, and cowering within ourselves, waiting for it to all be over. A thick callous skin surrounds us and we are able to go out in the world. We are able to face the contradictory messages, the scent of pine and gingerbread, and the sound of Mariah Carey wanting us for Christmas.

Recently, this form of self-defense has gotten to me. The first time I really remember it changing my behavior was in mid-December of last year. Naturally, it happened at the mall. Not only was I going to a mall, but I was going to a mall to buy something for myself. When I got there, I ignored my normal instincts to be courteous, and cut across a lane of on-coming traffic to steal a parking spot from someone. I went inside, spent some money, and felt I was just doing what I had to in order to survive.

But then it happened again later in December.

Around that time every year, the traffic lights are taken down at a busy intersection I need to drive through to get home from work. This is either a menacing social experiment or just something they have to do to clear the line of sight for the New Year’s Eve celebration. We’ll never know for sure. Either way, the lights are gone, and without signals and instructions, this intersection becomes a stage on which the Holiday-frenzied masses come to battle.

And so on that evening in late December, I approached the intersection. It was cold, it was dark, and everyone was certain that their problems were more important than everyone else’s problems. I stopped at the intersection at the exact same moment that two other cars stopped. Normally in this circumstance, there would be a flurry of hand signals and waves and headlight flashes of politeness: “No, no, after you,” I would say, smiling. But not on this day. On this day, after coming to a complete-ish stop at the temporary stop sign, and without any hesitation, I stepped on the gas, pushed my car forward, revved the engine, looked from side-to-side, and established my dominance. I drove through the intersection and made my way home, completely ignoring the fact that I drive a four-door sedan with an engine that sounds like a rapid succession of bottle-fed kitten burps.

It was surreal. I felt like I was truly participating in the holiday season. I felt like a cog in a wheel. Part of something bigger than myself. But mostly, I felt like an asshole.

A few days later, a new year had started, and some friends were having a party. As I walked in the front door, I heard a young voice with no emotion say, “Bill is burning, now.” I wasn’t sure who Bill was, but before I could be alarmed by the nonchalance from this clearly demon-possessed child, I walked to the porch where they kept the fire pit. Inside this fire pit was a reindeer made from logs, burning in earnest. Bill the log-bodied reindeer had been thrown into the fire pit as a celebration of the end of the holiday season. A group had gathered around the fire, and we all stared at one of the Bill’s legs as it caught on fire and fell into the pit. No one bothered starting any conversations. We all just watched the fire and gave updates to the children who ran past every few minutes, asking how much of Bill was left. 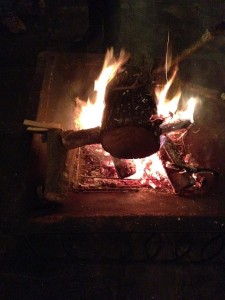