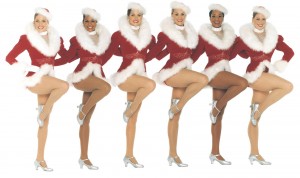 How to Date a Rockette, by Jon Gugala

First, see Rockettes your whole life: in TV and movies; for Christmas, yes; during the Super Bowl Halftime show. Hell, they’ve been around since 1925, and an annual tradition at Radio City Music Hall in New York City since 1932. Their long legs and short skirts are so pervasive that this first step shouldn’t be hard. That line kick, where they lock arms and swing legs in unison—it’s as quintessentially American as hamburgers and oral sex. As a groomsman at a wedding you tried it one time, someone’s armpit wetting your shoulder as you all kicked maybe knee-high for a photo that never turned out.

Let it steep like coffee grounds into your subconscious. That’s important for the proper foundation.

You may have never met a Rockette before, never been to a Rockette show. All is not lost: Rockettes aren’t just in New York. Companies of girls are strategically placed all over the country during the holidays—even Nashville. Rockettes will come to you.

You meet them in November at the shitty retail job you work selling women’s athletic apparel. It is rare for a man to sell women’s athletic apparel, which is why they gave you the job. The entire company of Rockette girls, 20 or so during that day, carpool in in groups of four. They travel in packs like Mormons in yoga pants. It is alarming to see so many good-looking girls together not in a club.

You meet Antonia as she’s checking out. It’s her lips you notice first: full, red, dominant. She is shorter than you would think—dance shoes add a few inches—and she has pale white skin of the Spanish line in Puerto Rico; their round, dark eyes; and the black, lazy curls. She buys a headband.

When you ask, she says she is a dancer, and when you ask what kind of dancer, she says she’s a Rockette. The coffee grounds have steeped so long they are strong enough to dissolve a nail. This is how it must be.

You meet her a half-hour later in Whole Foods on your lunch break. She is browsing the vegetables, and you call her by name.

It’s a Friday and there are plenty of other customers feeling up the produce. She has several bags of vegetables that she pushes in a tiny cart. Rockettes eat a lot of vegetables, you discover, because though they perform up to four shows a day, step-kicking hundreds of calories with each, they take their weight as soberly as a professional boxer.

This is where you ask for her number, the excuse something vague about volunteering as a tour guide for her stay. The ballet, you say. The zoo. (You’ve not been to either. This is OK; you would for her.)

You call Antonia the next day around noon and she texts back at 11:30 that night: “Sorry just got out of rehearsal how was ur day?” You get this the next morning; you are 31 and went to bed at 10.

Antonia, when you finally talk over the phone, is fascinating and mysterious. What is Florida like, you ask. Was growing up with a mother and father who owned a dance studio difficult?

You ask her if she’d like to get a drink.

This is the point where you should exit.

There is no future in this at all, you think, and not because she is just in Nashville through December 24. No, it’s because you feel like a dirty old man, and anyone you will tell about this is going to call you a dirty old man. But “Dinner tomorrow?” you say at the end of the call, and here is why: there is something unsullied about her, and you feel like at this point in your life you’re made from thrift store t-shirts.

You tell the girls at work around the break table over peanut butter-filled pretzels. You tell them she is sweet as you eat a piece in bites, and yes, you are going to her dress rehearsal on Friday at the Grand Ole Opry, but that’s it; you’re going to have to cut it off. She is 19, after all. What are you going to do, listen to dubstep?

(You say this to be funny, but you have no idea what she listens to.)

“Just have fun,” one of the girls tells you.

One actually says, “Age is just a number.”

They are all going to the Justin Timberlake concert.

On Friday night you wear a shirt and tie you’ve owned for four years, around the time of her sophomore in high school. You bring a bouquet of sunflowers from Trader Joe’s because it seems like a happy flower, nice, but not too nice, because after all you are going to break this off immediately after the show.

(You also understand they last a long time.)

You do not have a good plan.

The performance is amazing. True, it is geared for the youth, and there is an abundance of families whose children fidget in their Christmas sweaters and clip-on ties. But the set is elaborate and constantly belching cast members from different doors or raining confetti from the ceiling or marching livestock across. There are a variety of dance styles, and the precision is militaristic. Antonia is at the end of the chorus line, and it is her large, round eyes that give her away despite white stage makeup. It is magic to see her possessed with the grace of very end of the movements, the small wrist flourishes, the evidence that technique has ended and art has begun.

You wait 30 minutes on a wooden pew in the lobby after the show until they are debriefed with several of the cast members’ mothers. You talk generally of how you know Antonia, pointing at her picture in the program, because it seems somehow exploitive to say you met her over vegetables and now you’re going on a date. “n my way!” she misspells through text, and she comes through the double doors into the lobby just before the ushers seem ready to tase you.

She wears her tight yoga pants and one of those long scarves big-looped that just makes her seem smaller, and her hair is pulled back tight in a bun from the show and her lips are just so red. They would taste like pomegranate, you think. She so loves the flowers, and there is something satisfying and complete about her holding them in one hand and a heavy dance bag in the other. You take a picture together in front of the theatre with her phone. You carry her dance bag to your car.

“Immediately” has become a relative term.

It’s past 11 and the restaurants in East Nashville are closed: Eastland Café, The Wild Cow; they are restaurants you’ve never even been in, anyway. You sneak her into No. 308 because it’s the only bar that has food, and you get a bench seat in the shadows and she can’t order a drink and so you don’t either. She crosses her legs over your knee and leans her head on your shoulder and you feel the mesh of her tights under your fingers.

“I love this, the people watching,” she says, roving the bar with her eyes. “So this is Nashville,” she says.

Yes, you say. This is Nashville—but it’s not yours. You’ve never been in here before, and the light is dim and the music is loud and there are a lot of pretty girls, one specifically, in a white t-shirt and a slouch beanie over her blonde hair, that you hope is older than 19, and then you feel guilty.

There is nothing on the menu Antonia can eat.

You take her back to her hotel by the airport. She is amazed by Lana Del Ray—“This is so good!”—and she is amazed by Punch Brothers—“Bluegrass?” she says—and it makes you sad because there is nothing that amazes you anymore. You feel old, and you hold her hand. It is much smaller than yours.

In the suite that is hers, you both lay on opposite ends of a couch, and you rub her feet with the fascination of an alter boy as you ignore the movie on TV. The room is decorated in shades of beige; there is a big bed that is freshly made six feet from where you sit.

“This is the best part,” she says of the movie, one of the Austin Powers series that you saw when you were her age, and instead of watching it, you watch her face and the light flashing off it, her open mouth as she catches her breath just before her laugh. Her hair shakes like a willow. “Right?” she says, looking at you.

“Yes,” you say. There are a few other moments, but this is the one you’ll remember most distinctly.

It ends when you say it isn’t going to work, that you want different things. The dénouement moves quickly; it’s sharp and it doesn’t bleed. She hugs you and her ribs feel like piano keys through her sweatshirt.

You listen to music on your drive home. You play the same Punch Brothers and Lana Del Ray songs, and you try very hard to hear them as she heard them, for the first time, new genres tumbling out like foreign languages, spiced like cinnamon and sandalwood.

The traffic light changes ahead. You stop. It stays red too long.