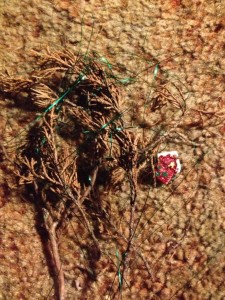 They linger too long after Christmas in the Walgreen’s. Like that year we decided to stay for two nights at his parents’ house rather than just one; all the festivities are done, most of the people are gone and everybody left is in a watch-a-movie-and-don’t-talk-to-anyone frame of mind. I mean, I know the 12 days of Christmas technically do start on Christmas day, but no one is in the mood to wear elf slippers past New Years’, much less look at them when they’re buying condoms or Pepto Bismol. And the way they get sun-faded and thrown in a die-hard clearance box is depressing.  It reminds me of the year we just neglected to take down our cedar Christmas tree. After a while we didn’t notice it, or pretended not to; a brittle, ornery brown monster in the corner we dared not touch or turn lights on for fear it would spontaneously combust.  By Easter, we were down right afraid of it; you could just walk by it and it would attack you, spitting barbed needles in its outrage.  We knew by the time we were sleeping with the windows open at night that it was time. With gritted teeth and closed eyes, I yanked the lights off, spinning the carcass wildly, and Thomas drug it out to the burn pile leaving a brown path in its wake and a bloody trail on his arms. Years later, when I’m lying on the floor in there, every once in a while those needles reach up from the depths of the shag carpet and jab unsuspecting bare skin of arm or foot.

So be forewarned:  you just never know what kind of monster you’re going to create when you let that shit stick around past its shelf life.