Life in the snow globe was good; the way it seemed things were supposed to be in that little world.  Holidays were happy times spent with family, sandwiched between festive gatherings with friends, and they had that sparkle to them like the tiny flecks of snow falling through water on a pristine environment. For a small stretch of time, we were insulated from the world and everyday life and its responsibilities, and I was one of those people who actually truly enjoyed Christmas.  When I was a child, my family split our Christmases between two sets of grandparents and extended family, and as adults my husband and I balanced time with our own two sets of parents and siblings. People all generally got along and we enjoyed wonderful meals, drinks, a few gifts and meaningful time together. My small nuclear family of one sibling and two parents provided a somewhat calm, intimate time and then we’d land in my husband’s family home with his parents, five siblings with spouses or partners and seventeen grandchildren. Between my sister’s Brandy Alexanders and the free-flowing wine/mingling atmosphere at the in-laws, it felt like a family version of a very relaxed cocktail party.

In 2011, the globe cracked and started leaking badly; a hole of air where water once filled the dome hovered over everything like a giant, empty cloud where no magic snow fell. My father had died of cancer at the age of 72 on October 28th. Thanksgiving that year, a holiday that has always been so warm and comforting, was almost unbearable.  By Christmas it felt like I’d progressed from just trying to hold it together and not burst into wracking sobs when I saw my father’s empty place at the table, but we were all still raw with grief and heavy-hearted, even while finding moments of joy.  The Hospice Holiday Grief workshop I attended helped;  they affirmed to a room of strangers united in grief that we had the right to break traditions, tell people how we really were doing when they asked and not just “I’m fine”, or even choose to just not “do” the holidays altogether and not have any guilt about it. But we did, and we got through it. It was particularly hard that year at my in-law’s place. They are a big family of people whom I love dearly, but when your father has just died and you’re with a large family who has not experienced that kind of loss, it feels isolating. As much as they tried to be sensitive, their world had not been rocked as mine had. Their lives continued and you could almost see an attempt to subdue their mood when they interacted with me one-on-one.  It was sweet, but also challenging. 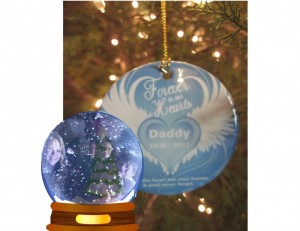 Something I will forever appreciate learning that year the snow globe cracked was the realization of how aloof I had been to what the holidays are like for some folks. I was on the outside for the first time, looking in at a happy family celebrating together and feeling separated from that joviality and that picturesque scene by the cold glass of grief and emptiness of loss. And suddenly I was aware of what this season must be like for people without families, or people estranged from their families. How do they tolerate all those happy cards of smiling kids and parents? What’s it like when everyone else is with family on holidays, leaving everything feeling like a ghost town as you go see a movie alone? How much do all those saccharine tweets and status updates and photos highlight the fact that, for some, there is no one with whom they are sharing these moments?

It has been a few years since that first Christmas without my dad. I have willed myself to find the deep joy in life, and sometimes I do feel again like I’m in that snow globe with my family, looking out from a world that, for a time, is magical and pristine and almost complete. Only now, I can see further beyond the glass and remember in my bones what it feels like on the outside, looking in.