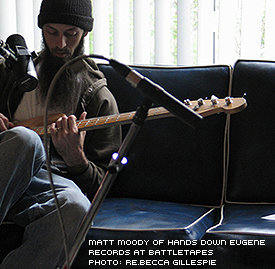 East Nashville has seen a dramatic transformation in the past decade. Historically the east side of the river has always been more progressive than the other parts of Nashville, and today it is a hotbed of what just might be an artistic renaissance… especially if you are involved with music performance and production.

There is something about East Nashville that attracts musicians and artists. That something might just be other musicians and artists, but it also could be the relatively affordable housing, the best coffee shop in Nashville (Bongo Java), the hip music-friendly clubs (Radio Cafe, The Family Wash, The 5-Spot), as well as an overall hometown-within-a-city vibe. You might just forget you’re in Nashville if you stay for a spell.

Time and space seem to change dimension when you cross over Gallatin road or Main Street into the 37206 zip code. There are beautiful Victorian and Tudor style homes, people walk freely for pleasure and transport, and there always seems to be something interesting happening: art exhibition at the Garage Mahal; dogs walking people; gatherings at the tiny post office; bold renovations of old homes.

Bohemian. Well, as bohemian as Nashville gets. It is no East Village, but it is the Nashville equivalent.

However, what you might not see until you live and mingle in East Nashville is the preponderance of music recording and performance behind closed doors. Studios don’t often advertise their existence for practical and zoning reasons and because most real studios aren’t like Sam Phillips Sun Studios where you walk in and book a session with a receptionist; business is built on reputation and referral.

It is possible that there are literally hundreds of active recording studios operating today in East Nashville and growing. This is not the PC mixer and condenser mic variety, but professional project studios with multiple isolated rooms, expensive microphones, preamps and multi tracking systems.

The granddaddy of them all is the legendary Woodland Studios where many a classic country sessions went to tape in the 50s and 60s. Today Woodland is owned by Gillian Welch and Dave Rawlings for their projects.

Then you’ve got other well known rooms like legendary violinist Buddy Spicher’s The Fiddle House across the street from Woodland, as well as Roswell East run by Jordan Richter (Mathhew Ryan, Sixpence None the Richer, the Legendary Shack Shakers).

A couple of blocks over you’ve got Grammy winner Brent Truitt’s Le Garage (Nitty Gritty Dirt Band, The Lonesome River Band), and Danny Ramsey’s Little Hollywood studio which is also has the distinction of once being the home of Marty Robbins and studio legend Grady Martin. Little Hollywood has put microphones in front of Ronnie McDowell, Victor Wooten, Walter Egan, Jeff Cease, Albert Lee, and many others.

Beyond these heavyweights of the major label biz, there are dozens of other studios hidden in otherwise unsuspecting homes, like Eric McConnell’s place. A friend saw a bunch of vans loading in and out of McConnell’s home and a roadie that looked remarkably like Jack White of the White Stripes. Turns out it was Jack. The phenomenal Loretta Lynn record produced by White was tracked at McConnell’s classic Victorian home. Hell, even the picture on the cover was taken in East Nashville.

Jack liked it so much that he relocated Nashville, but sadly to another part of town… We think. But we surely won’t hold that against him. 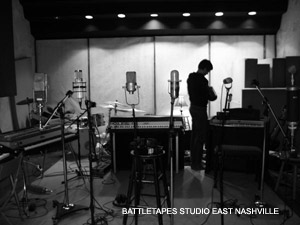 McConnell is in the Vanguard of the new generation of East Nashville studio wizards who feel equally at home with classic vintage guitars and advanced pro-tools techniques. Most musicians these days tend to be computer geeks too, and the modern computer has brought the barriers to entry down when it comes to getting top-quality recordings. For this reason, most musicians professional and otherwise invest in impressive home studios that allow the creative impulse to happen where they are most comfortable.

Another hot studio for indie rockers is Jeremy Ferguson’s BattleTapes, nestled in an East Nashville house and producing some amazing recordings for the likes of Forget Cassettes, Apollo Up, Hands Down Eugene and others. BattleTapes takes the cake for ambiance and bohemian vibe, because indie studios often realize that mood is just as critical as sound quality for a good recording.

It seems like everybody in East Nashville is damn talented, and to top it off, they probably have a studio and a killer self-produced CD, or a buddy who can help them get one. Everyone is genuinely interested in and supportive of the grassroots community. Walk into a bar like The Family Wash and you can throw a rock in the air and probably hit a working musician, producer, or agent.

So what is it about East Nashville that has things cooking in recording land? A possible explanation is the ‘Americana’ movement that keeps building steam. Country is cool again, Western is hip, and a new generation of musicians have embraced the rootsy sound of bluegrass, slide guitars, honky tonk, and well… great songcraft.

Quite a few professional musicians are relocating (or at least buying homes) in East Nashville for a variety of reasons: access to music community, a low cost of living, no state income tax, laid back environment, and moderate climate.

But what you will hear most from the working professionals living here is that the attitudes and ethics of music producers, writers, and managers are substantially different from LA, New York, Portland, Chicago, or other “hotbeds” of American music. Nashville has always been about professionalism and modesty. Nashville is synonymous with country music, and Country has always been down-to-earth music made by down-to-earth people.

Being a professional isn’t about being an enigma, or being in the inside crowd. Some folks pick guitars and write songs, others build houses or own businesses. Selling out is a blessing instead of a curse, and is never a reason to get up on a high horse. This is an unspoken ethos of the southern country music culture that I hope Music City never loses sight of, and just might be the ticket for an artistic renaissance of global proportions here on the Cumberland river.